Reports are out claiming that Feyenoord fullback Daryl Janmaat is ignoring fresh transfer interest swirling around him. 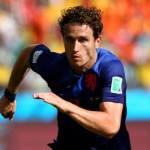 Before joining Holland’s World Cup squad last month, the 24 year old declared he expected to leave Feyenoord this summer. He is now inside the final year of his current deal.

The defender is being linked with Manchester United, Arsenal and Napoli, among several European heavyweights.

“I’m ready for a step higher. But if I leave Feyenoord, it will be for a really good club. Everything has to be right.

“But again, my attention is now not on that. Winning the World Cup is the highest you can achieve as a footballer.”