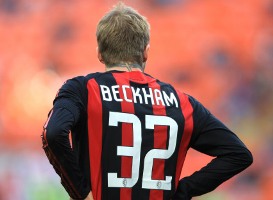 Beckham and his team the Los Angeles Galaxy will play AC Milan on Sunday night in an exhibition match, Beckham’s first home game since returning from Italy on July 10.

Beckham told reporters that he is looking forward to the game but said that it is going to be funny playing against recent his teammates. However Beckham added that as a player you are always going to come up against teams you’ve played with and against in the past and that it won’t be too strange.

Galaxy striker Landon Donovan said that the team will be competitive and that is for sure. He also added that this is a very good opportunity for all the players in Galaxy and added that the club don’t want to stand around like cones and get embarrassed.

One of AC Milan’s newest acquisitions is defender Oguchi Onyewu, who started for the United States in last month’s FIFA Confederations Cup and in the 2006 World Cup.

Onyewu signed with Milan on July 7 but is expected to play later this week, as AC Milan competes in the World Soccer Challenge.

Beckham played in his first MLS game this year Thursday night against New York in East Rutherford, N.J. During the Galaxy’s 3-1 victory, fans booed Beckham every time he touched the ball.

Juraj Kucka Linked With A Move To AC Milan