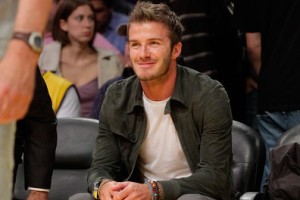 Beckham is officially still on-loan at Milan and has been recovering from Achilles surgery.

The England midfielder greeted his teammates at training yesterday before taking a seat in the stands to follow the session. Later he visited the locker room to say ‘hello’ to his former teammates.

Milan end their season on Sunday against Juventus.

M’Baye Niang Determined To Prove His Worth At AC Milan

David Beckham Admits He Is Getting Older