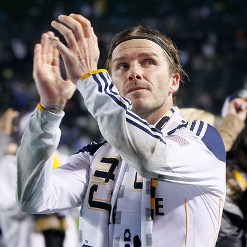 It has been revealed that LA Galaxy star David Beckham is still mulling over his next move.

Ambitious Ligue 1 outfit PSG are reported to be leading the race for his signature, with sporting director Leonardo confirming initial discussions had taken place.

“I’m very proud of the time that I’ve spent with the Galaxy and it might continue,” said Beckham.

“I think at the end of the day I have a big decision to make but I obviously haven’t made one yet.”