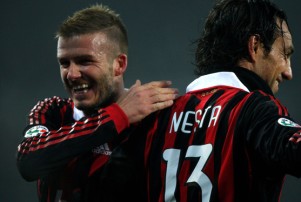 AC Milan midfielder David Beckham has promised that he will not celebrate if he scores against his former club Manchester United in next week’s Champions League last-16 clash.

Manchester United will go face to face with AC Milan in the Champions League at the San Siro next Tuesday, with the return leg on March 10 at Old Trafford.

After 394 appearances for Sir Alex Ferguson’s side, the England international midfielder believes that it would be inappropriate behaviour should he find the net for the Rossoneri.

This will be the first time Beckham has faced his former club and he remains grateful to the fans who backed him after he was sent off against Argentina in the 1998 World Cup.