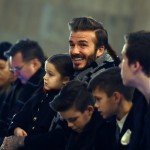 It has been reported that Manchester United legend David Beckham feels winning the FA Cup can rescue their season.

United have reached the quarterfinals stage after victory last night at Shrewsbury Town.

Beckham told talkSPORT: “It has been a disappointing season so far obviously because of the performances and the way we have played in certain games, but any silverware at the end of the year or any good run in any competition is successful.

“Unless you win everything at Man United a as fan and as a player you never think it is going to be enough, but at the end of a year where there has been a lot of criticism and the performances haven’t been as good, to come away and be in an FA Cup final… there is nothing you enjoy more than going down to London, getting ready in your FA Cup suit and playing in these games.” Zinedine Zidane Not Disappointed To Miss Out On Real Madrid Job