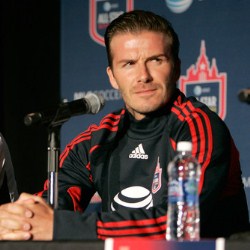 The LA Galaxy midfielder, who will captain an MLS All-Stars team against Manchester United in New Jersey on Wednesday, believes Chicharito will have a long and successful career at OT.

Beckham told manutd.com : “It’s great the way he’s adjusted to a different country and a different style of football,”.

“But great players can do that. Many people have been surprised at how he’s performed and the goals he’s scored but he’s taken his chance and deserves to be here.”

Hernandez was granted an extended summer break after playing for Mexico in June’s Gold Cup but met up with his Reds team-mates in New Jersey on Sunday.

He trained for the first time this season on Monday but is not expected to take part in either of United’s remaining two US Tour games.

“I’m sure many people would like to see him play here [in America],” Beckham said.

“He deserves everything he’s achieved so far and everything he’ll continue to achieve. He’s not just a great player but I’ve heard he’s a great lad and works hard. He’s going to be successful.”