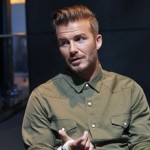 It has been reported that Manchester United legend David Beckham is sad to see Danny Welbeck leave Old Trafford but believes he will shine at Arsenal.

Striker Welbeck, who came through the Old Trafford youth system, joined the Gunners for £16m on transfer deadline day.

“To see him leave Manchester United is sad. He had been there since he was eight and his heart was in Manchester.”