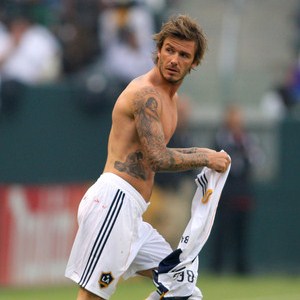 LA Galaxy superstar David Beckham got his name on the score sheet once again after he found the back of the net against FC Dallas during the MLS match on October 24, 2010 in Carson, California.

The former Manchester United and Real Madrid ace known for his trademark free-kicks, unleashed a powerful shot from outside the box after Landon Donovan provided him with a sweet assist.

Donovan pushed Dallas’ Jackson Goncalves away to steal the ball near the left end line and passed to Beckham, who fired a low 23-yard shot between goalkeeper Dario Sala and the left post.

LA Galaxy were trailing 1-0 before the England ace tied up the score his his goal. Galaxy ended up winning the game 2-1 thanks to a 43′ minute goal from Vitor Junior.