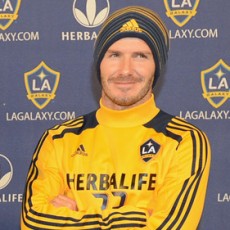 A statue of Ferguson will be unveiled at Old Trafford later today.

The LA Galaxy star found stardom under Ferguson and was a member of six title-winning sides before leaving for Real Madrid in 2003.

Beckham may have had his differences with Ferguson at times but the pair have long since been reconciled and the respect is evident.

Beckham said: “I think the manager has been so successful because he’s passionate about Manchester United and he’s a born winner.

“He knows how to win games, how to handle pressure and how to look after his team and his players.

“Playing under him for the years that I did, well – he was like a father figure to me.

“I moved up from London to Manchester and he always said to me, ‘If you’ve got any worries, come and knock on my door – it’s always open’.

“I was scared to go and knock on his door because of who he is but he always made me feel as if I was part of a family and that’s how you feel when you’re at Manchester United.”