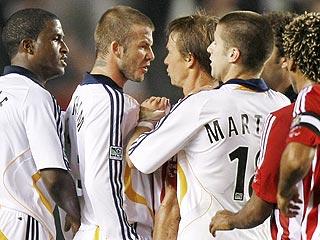 Sensational news are out and it has been reported that David Beckham allegedly swore at the fan he confronted during a recent friendly.

David Beckham confronted jeering fans after being substituted in the 75th minute of a friendly match between LA Galaxy and Milan last week and the former England captain was clearly seen beckoning to the fan who then jumped out of his seat and made towards the England midfielder before being stopped by security.

At the time, Beckham claimed that he had invited the fan to shake his hand in an attempt to calm him down but new video footage of the incident taken from a different angle shows his words in a very different light, according to the paper’s lip-reading experts.