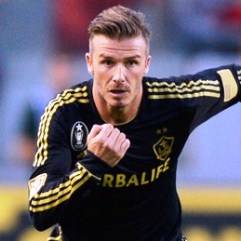 The 37-year old LA Galaxy midfielder missed out on selection for Team GB at the London Games this summer but is now intent on making it to Brazil in four years’ time.

According to a LA Galaxy source : “David still sees himself as a contender for the GB team,”.

“The London Olympics was meant to be his farewell at Wembley – but now Rio 2016 is in his sights.”

Landon Donovan Is Everton’s Player Of The Month