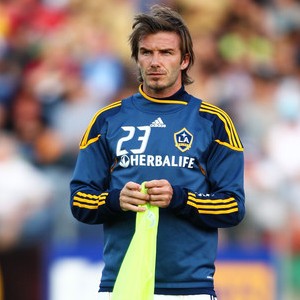 Reports are out claiming that World Soccer Superstar David Beckham has left the door ajar to a return to England in January.

According to The Sunday Mirror, the former England captain has all but ruled out going on loan in January despite widespread interest from Europe and notably from clubs in the Premier League.

It is also said that top-flight English clubs including Everton, West Ham and Sunderland have already been knocked back in attempts to bring him back to England next month.

Sources close to Beckham claim it would take an unbelievable offer from a top four English club to tempt him to change his mind or an elite club in Europe.

That leaves Chelsea, Arsenal and archrivals Tottenham as the only clubs capable of an outside chance of securing a loan move for Beckham.

The latter, Tottenham appear to be the only serious contenders with Harry Redknapp a huge Beckham fan and astute chairman Daniel Levy well aware of the commercial value brand Beckham would bring to his club.

Even so such a move is likely to bring massive opposition from Beckham’s current employees LA Galaxy.