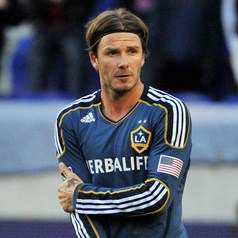 Sensational news are out and it has been revealed that LA Galaxy star David Beckham wants to join Tottenham.

The Manchester United and Real Madrid legend is a confirmed target for French giants PSG.

However the Sunday Mirror says privately Beckham’s advisers have ruled out any switch to a club that is not competing for major honours, leaving Tottenham in pole position to sign him.

And the fact that Becks now accepts he can’t be guaranteed a first team place can encourage an approach from Spurs.

Spurs boss Harry Redknapp said: “David’s a fantastic player and a great influence in and around the club. He’s someone that I have always admired and is a great role model.

“I would take him, for sure but my dilemma is being able to guarantee him first-team football.

“I have an abundance of talent in midfield so it’s difficult to work out how and when I can play him.” Aston Villa In Talks With Tottenham For Emmanuel Adebayor