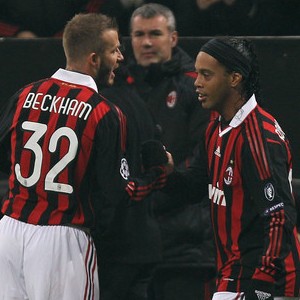 According to the Ronaldinho’s agent and brother, Roberto de Asis, David Beckham wants the Brazilian midfielder to join him at Los Angeles Galaxy.

Ronaldinho, who has also been linked with a return to Brazil with Flamengo, has spent the last two seasons at Milan, where David Beckham has also had two spells on loan.

And while he finds both LA and Flamengo interesting for the future, his brother says he has no plans to leave Europe just yet.

“And David Beckham is pushing to get Dinho at LA Galaxy.

“Should an agreement not be reached for a renewal at Milan, this could be an option for next summer.”