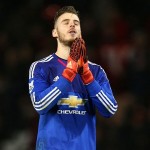 The Independent claims that Real will be unable to sign players both n the summer window and next January, after being found guilty of irregularities regarding the acquisition of under-18s.

Real bosses met earlier this week to discuss the sanction and emerged so confident of winning their appeal, according to the Independent, they will not rush through the signing of De Gea in January.

Instead, they will wait until the summer when they will again attempt to take him to Madrid.