It has been reported that David de Gea has declared he wants to stay with Manchester United. 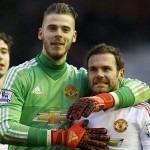 The Spanish international goalkeeper is being linked again with Real Madrid, but he insists he wants to become a United legend.

“I am happy, I enjoy and I believe in the team. (Peter Schmeichel and Edwin van der Sar) were the best goalkeepers in the Premier League, they are legends at this club and that’s what I want to be,” De Gea told Sky Sports.

“I practice every day to become the best goalkeeper in the world, that is my goal.

“Also, I want to win trophies with Manchester United.” Man Utd, Chelsea To Do Battle For Valencia Midfielder