It has been reported that Manchester United goalkeeper David de Gea would welcome the return of Cristiano Ronaldo from Real Madrid. 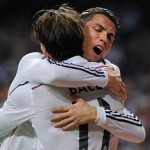 United boss Louis van Gaal admitted last month that he is interested in bringing Ronaldo back to Old Trafford.

And De Gea says he would be delighted by the second-coming of Ronaldo.

“Of course I would like Cristiano Ronaldo to come to Manchester United,” said the keeper.