Reports are out claiming that Manchester United goalkeeper David de Gea feels they can shake up the title race with a positive Christmas run. 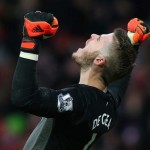 While the goalkeeper is still adapting to the hectic winter run of fixtures that is absent in the Spanish game, the former Atletico Madrid stopper insists he relishes this period of the season and is looking at it as a chance to build on the Reds’ unbeaten run of seven matches and to entertain supporters who are enjoying Christmas breaks.

“It’s all about keeping this good run going,” De Gea told MUTV. “Both as an individual and as a team and keeping going with good results.

“It’s a bit strange for all of us who are coming here from other leagues where we’ve been used to having a winter or at least a Christmas and New Year break. At the same time, these are the fixtures you really enjoy. It’s a good period in the season and these games are always exciting.

“You’re used to spending your holiday time with your own family, but we appreciate it’s really important for the people who are watching the games and have been working all year round. It’s nice for them to be able to have a rest and to enjoy some exciting football.”