It has been reported that David de Gea has been included in Manchester United’s squad for the Champions League play-off against Club Brugge. 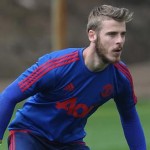 UEFA rules state that a player cannot play for two teams in the Champions League in the same season but with an exception for qualifying rounds, meaning De Gea could hypothetically play for a second team in the tournament even if he is selected for the Club Brugge game.

The Spanish international has been linked with a move to Real Madrid throughout the summer transfer window and is one of four goalkeepers in the squad for the qualifier, on Tuesday August 18.