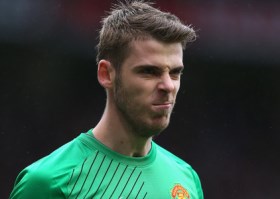 Thanks to a performance of grit and determination, United upset the odds and secured a draw that keeps the tie well and truly alive ahead of next Wednesday’s second leg in Bavaria. Speaking after the match, De Gea was bullish about his side’s chances.

“We are satisfied and we feel that we showed a great match,” De Gea told UEFA.com.

“We put in a lot of effort against a tough opponent. We nearly got a victory as well. I think that we knew we had to defend well, close down the spaces and try to be dangerous on the counter. We produced clear chances and we showed a great match.

“This club is a big club. It is in difficult times when the team can show its strength and how big this club is. I am happy for that, for the people who thought it would be easy for Bayern. We played a great match and I am happy about that. I think there is still a chance. The result is a draw, the tie is still open and we will fight until the end.”