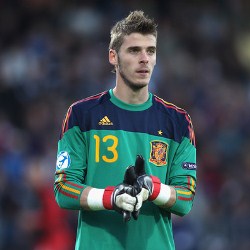 David de Gea has been photographed arriving at a local hospital ahead of a proposed move to Manchester United.

The Spanish Under 21 goalkeeper has been widely tipped to replace Edwin van der Sar but remained tight lipped over a move until the European U21 Championship finished.

After Spain won the final on Saturday, the Atletico Madrid goalkeeper has wasted little time in moving to complete the transfer as he was pictured arriving at Bridgewater Hospital in Manchester on Monday.

The photographs, which have circulated around British media, showed a hastily-assembled attempt by staff to shield De Gea with a blanket, which was too small to conceal the 6’4″ Madrid native from onlookers.

Before the championships United and Atletico were reported to have agreed a fee of £18 million for the young keeper.