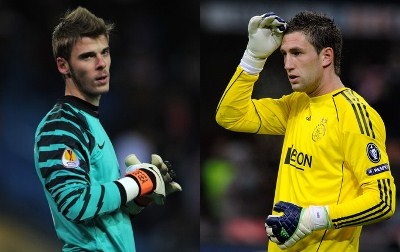 Manchester United is currently on the hunt to find a replacement for the retiring Edwin van der Sar. Many big name goalkeepers have been linked with the Red Devils but only two names stand out. Atletico Madrid’s David de Gea and Ajax’s Maarten Stekelenburg.

However finding a goalkeeper to replace an influential one is never easy and Manchester United have experienced this before when the great Peter Schmeichel retired in 1999.

At the moment De Gea and Stekelenburg are in the running to replace Van Der Sar but who do you think Manchester United should sign? Lets take a brief look at these two goalkeepers.

David De Gea is a 20 year old Spanish goalkeeper and is 6ft 3in in height. He has played a total of 46 games for Atletico Madrid and has established himself as the number one goalkeeper at the club.

De Gea has never represented his home nation, Spain but has played for the U-17, U-19, U-20 and the U-21 squad. Will he be drafted into the senior squad anytime soon? With established goalkeepers such as Casillas, Valdes and Reina, it will be a miracle if De Gea manages to break into the Spanish squad.

Maarten Stekelenburg is a 28 year old goalkeeper and is 6ft 6in in height. He is definitely taller and more experienced than David de Gea. He has played a total of 186 for Ajax since 2001 and has won numerous Dutch titles with Ajax.

Stekelenburg also has the advantage of being the number one choice for the senior Dutch side making his debut in 2003 and has 39 caps to his name.

Who Should Manchester United sign? Vote now and let us know what you think. Also feel free to leave your comments below. Cheers!