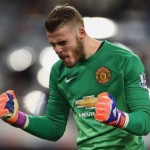 It has been reported that Manchester United could be handed a huge boost as star goalkeeper David De Gea is reportedly planning to stay put at Old Trafford.

With De Gea’s contract at United set to expire at the end of next season, he has been widely tipped to leave the club to join Spanish giants Real Madrid during the upcoming summer.

While it is looking increasingly likely that the 24-year old will be plying his trade at the Santiago Bernabeu next season due to the delay in signing an extension, the Manchester Evening News reports that the Spaniard could remain at United after all.

The report states: ‘United can match any financial offer that suitors Real Madrid are believed to be ready to put on the table and are in no mood to be swayed by any potential record breaking goalkeeper offer for De Gea to topple the £32.6m for Gianluigi Buffon paid by Juventus to Parma in 2001.

‘But money is not the issue for United’s outstanding Player of the Season. The inner turmoil for De Gea is understood to simply be a straight battle as to where he wants to play his football next season.

‘United believe he is happy in England and is enjoying life in Manchester, but in the background there is his desire to return to his birthplace to play for Real.’