It has been reported that David de Gea hopes to leave Manchester United this week for Real Madrid. 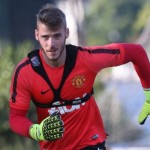 Marca claims that De Gea is fearful of the fans’ reaction to him following his ongoing transfer saga this summer.

And it’s understood the United faithful have also been riled by Sergio Ramos’ attempts to use the club to earn a better deal at Real.

This all points to the 24-year-old receiving a fairly hostile reception at Old Trafford should Louis van Gaal name him in the starting XI against Tottenham.

Real Madrid are also keen for the goalkeeper not to make an appearance as it would damage the club’s reputation as a dominant force in the transfer market. We Were Not Prepared Mentally And Physically – Xabi Alonso