It has been reported that David de Gea has won the double at Manchester United.

The Spanish goalkeeper was named Manchester United’s player of the year by both his team-mates and supporters at the club’s annual awards ceremony on Thursday night. 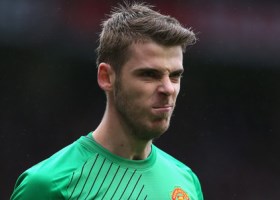 De Gea picked up the supporters’ award after claiming 54 per cent of the vote, ahead of Wayne Rooney and Adnan Januzaj in second and third place respectively.

He said: “I want to thank the fans. From my very first day at the club, I have felt their love and I’m really happy. For them, we will try next season to do our best again.”

Just moments before, de Gea had also received the accolade of Players’ Player of the Year from his colleagues.

“Sometimes it’s important for your team-mates to give you confidence and I think they’re some of the best team-mates you can have.

“I tried to do my best this year and I think it was my best season so far. I felt really good and confident. I will try to do the same for next season.”