It has been reported that David de Gea’s future at Manchester United is in doubt. 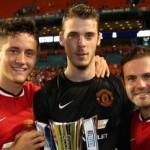 The Daily Star reported that the Spanish international’s girlfriend has urged the Manchester United goalkeeper to quit the Premier League and return home to Spain.

The 23 year old has now been beckoned back to his homeland by his girlfriend, Spanish signing sensation Edurne Garcia.

“Of course I want him to play here,” she told The Other Report. “Whenever you are closer, the better.

“In any case, I support him in everything and want the best for him.

“Also, Manchester is not that far, I have spent many years going back and forth.”