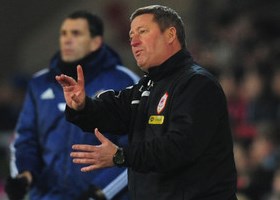 The managerless Bluebirds are 15 places and 24 points behind Arsene Wenger’s table-topping side.

Kerslake said: “We believe we can go there and get a result. We know Arsenal are one of the finest sides in Europe, but we will go there with no fear and in good spirits.

“It felt like two points dropped against Sunderland because of the position we were in, but it was still another point.

“Whoever comes in as manager will inherit a wonderful group of players at a place where support is second to none.”