Reports are out claiming that former Chelsea defender David Luiz is excited about his move to PSG. 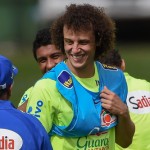 The Brazilian international centre back joined PSG in a £50 million deal to make him the most expensive defender in the game.

He said: “I tried to fix everything before coming to selection.

“This is a new stage, a new project, a new country, a new language … I was very happy at Chelsea, I gained titles, but the end of the cycle has arrived. I’ll start a new round in Paris.

“It will be announced when the window will open. But I can say that everything is signed with Paris and I am very happy.

“I am privileged, I played in big clubs, big cities in the world. I can not complain. I want to represent the best Paris. Achieving the club, winning titles, and especially show the true David Luiz as a player and a human being.”