It has been reported that David Luiz has told Chelsea boss Jose Mourinho he wants a move to Barcelona. 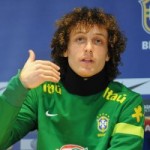 The Spanish champions’s initial bid of £25m was laughed out of the room by Chelsea, though the firm interest was enough for the player to inform the English club he wanted to leave, says El Mundo Deportivo.

The Brazilian international’s stance has encouraged Barca, who are now prepared to raise their offer to around £31m. That, however, falls £12m short of Chelsea’s minimum expectation.

The former Benfica star is top of new Barca boss Gerardo Martino summer shopping list as he bids to reposition the Catalan giants at the summit of European football.