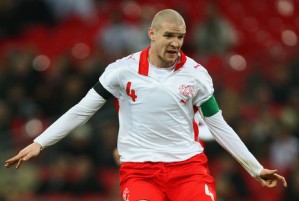 Moyes revealed that the deal was agreed with the Gunners hours before Everton’s FA Cup clash against Birmingham.

He told reporters that he is pleased to have signed Senderos on loan with Joseph Yobo out with a hamstring injury in the African Nations Cup, Phil Jagielka still not match fit and Lucas Neill leaving.

Moyes then said that there is no way he could go into the rest of the season with just two central defenders.