David Moyes has revealed that Manchester United midfielder Marouane Fellaini will return to training next week after recovering from wrist surgery. 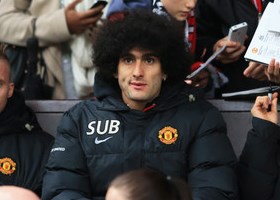 Even Fellaini’s present absence has attracted criticism, with some fans questioning why the 26-year-old could not have played on with a light cast on his wrist.

Moyes has said such a prospect was a non-starter.

Moyes told MUTV : “Fellaini will have the cast taken off his hand on Monday,”.

“It was a serious wrist injury which needed a major operation.

“It was bad. He had to make sure he got it sorted properly otherwise it might have affected him for the rest of his life.

“He has been able to do lots of running and lots of training but nothing with a football.

“Hopefully next week we will get him back.”