It has been reported that Manchester United boss David Moyes was disappointed with the way his side conceded in Sunday’s 2-0 loss to Everton. 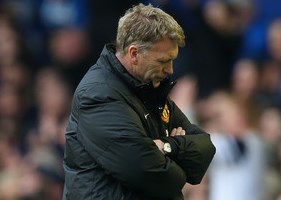 Phil Jones handled a shot from Romelu Lukaku just before the half-hour mark which allowed Leighton Baines to convert from the penalty spot before Kevin Mirallas was played on-side by Alex Buttner to add a second from a tight angle later in the first half.

The loss was the first time United had been beaten by the Toffees both home and away in more than four decades and the result left a bitter taste in the mouth of ex-Goodison Park manager Moyes.

“Prior to that we passed the ball really well, kept the ball, had great control of the game. What we couldn’t do was make enough chances.

“We had a great control and we got done by two stupid decisions – a stupid decision to dive in front of the ball for one of them – two poor goals to give away.

“I thought we played very well in the first half. We came in 2-0 down but had been passing the ball really well.