It has been revealed that David Moyes praised Wayne Rooney’s performance in Manchester United’s victory at Swansea City. 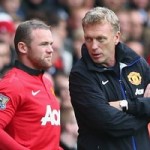 After missing all United’s pre-season games amid talk he wants out of Old Trafford, the England international got an hour under his belt for England on Wednesday.

He added an additional 30 minutes to that today after replacing Ryan Giggs and Moyes was satisfied with the 27-year-old’s contribution.

“Wayne did well when he came on,” said Moyes.

“He made a great run which opened up the chance for Robin to move the ball onto his left foot for his goal and the ball he slipped through for Danny was well weighted.

“He helped the team today in getting the result.”

United’s supporters also backed the forward, chanting his name both as he warmed up and on his arrival into the fray.

“They do that at Manchester United. They recognised that when Wayne came on.

“He is a good player and he showed that with some of the actions he did in the game.”

Worryingly, though, he did pick up a knock, although he does have nine days to recover before United’s blockbuster showdown with Jose Mourinho’s Chelsea on August 26.

“He got a kick,” said Moyes. “It was quite a bad one down the back of his Achilles.

“He is still lacking match practice but I gave him another 30 minutes today and that will bring him on.”