It has been reported that Manchester United boss David Moyes was delighted with two-goal Wayne Rooney in victory at West Ham United. 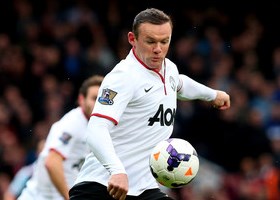 The Scotsman reckons wearing the armband inspired the England international to new heights – and wants to see more of it as he decides whether to give Rooney the honour long-term.

Moyes said: “Wayne has led by example all season. Maybe wearing the armband, he was taking a wee bit of pride in wearing that, to show exactly what it means.

“Wayne scores two goals at West Ham and that’s why players of this ilk, you write about and talk about more than many others.

“Can he excel wearing the armband? It’s for him to show it. You’d have to say that he showed it here. You get opportunities in football.

“If you’re a player out of the team suddenly you can get a chance, or if you become a key player and then get the chance to wear the armband and take that on. He did that.

“I’ve said there will be no decision taken until next season, but I thought Wayne picked up and did what he needed to do.”