David Moyes has declared that Adnan Januzaj will not be joining Real Sociedad on loan this winter. 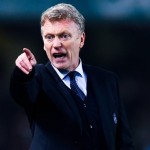 The Manchester United youngster has been linked with a potential move to Spain for the remainder of the season but Sociedad boss Moyes insists he will not reuniting with his former player.

“I’ve read about it but I don’t know where it has come from. It hasn’t come from me,” he told ESPN.

Januzaj has made just four starts for a total of 11 Premier League appearances under Louis van Gaal this campaign indicating that the Red Devils may look to send him away for regular game time but it looks like it won’t be to Sociedad.