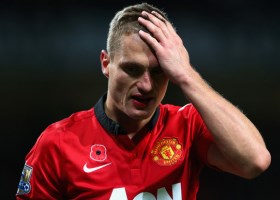 The Serbian centre back was forced out of their win over Arsenal at halftime yesterday.

Moyes gave a positive update on the fitness of Vidic and explained the 32-year-old will now undergo a scan.

“I didn’t see the incident at first,” Moyes said.

“From the touchline, I thought it was just a clash but I’ve had a chance to see it now and he took a terrible blow. But as far as I know, he is okay. He is conscious, he will get a scan and we hope he will be okay.” Mike Phelan : Rooney Will Be Ready To Face Valencia