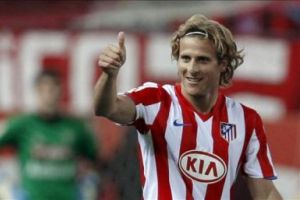 Everton manager David Moyes has revealed that he would love the chance to bring in a player such as Diego Forlan in the January transfer window.

The Uruguayan international striker has expressed interest in a possible return to the Premier League and Moyes would like to give him a home on a loan deal if it was possible.

Moyes told reporters that he would give Diego Forlan a chance if the striker is interested.

He added that Everton have played with one arm tied behind its back with what it has got but he hopes to make some additions in January and the ones who come in will be on loan.

Moyes went on to say that with those players plus the players coming back from injury, there will be a swell that will take Everton into the second half of the season.

Forlan has scored over 60 goals in just two years with Atletico but question marks over his future in Madrid have been raised recently.