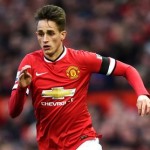 It has been reported that Real Sociedad coach David Moyes has likened Manchester United winger Adnan Januzaj to Chris Waddle.

The Belgium international thrived at United last season under Moyes.

“He [Januzaj] has the ability to go past people, inside or outside,” he told FourFourTwo. “He has quality on the ball and enough arrogance to show it.

“Adnan can become a top player. There’s a composure about him, he could be a wide player or even a centre-forward. There’s a lot of Chris Waddle about him. He’s got the lot.”