It has been revealed that Manchester United boss David Moyes has rubbished claims that Robin van Persie is missing Arsenal. 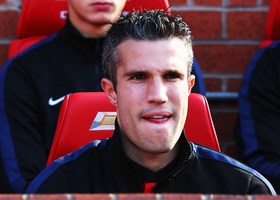 Arsenal boss Arsene Wenger cheekily suggested on Friday he still thinks of Van Persie as a Gunner ahead of this weekend’s clash between the two clubs, in recognition of the eight years’ service he gave to the north London outfit.

However, Moyes disputes that belief and claims from what he sees, Van Persie is perfectly happy where he is.

Moyes told MUTV : “I still think Sunday will be special for Robin,”.

“It is the club he played a lot of games for.

“But he has moved on now. He loves what he is doing here.

“In the time I have worked with him, he only speaks very highly about everything about the club.

“I went for a chat with him when I first got the job and he spoke in glowing terms about United.

“But obviously he had a great time in his early career with Arsenal as well.”