It has been reported that Manchester United boss David Moyes has questioned their opening Premier League fixtures. 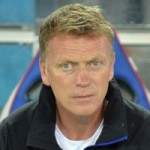 Among their first five games, the champions play Chelsea at home and Manchester City and Liverpool away.

The former Everton boss said: “I think it’s the hardest start for 20 years that Manchester United have had.

“I hope it’s not because Manchester United won the league quite comfortably last year [that] the fixtures have been made much more difficult.”

He added: “I find it hard to believe that’s the way the balls came out of the bag, that’s for sure.”