Manchester United boss David Moyes admitted he was stunned by the inept display of his players as they were left on the brink of an early Champions League exit by Greek side Olympiacos. 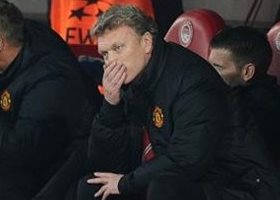 Goals from Alejandro Dominguez and Arsenal loanee Joel Campbell gave Olympiacos a 2-0 lead at the halfway point of their Champions League last-16 tie against United.

Given that Moyes’ men are 11 points adrift of the top four, winning the Champions League was seen as their best way back into the competition.

But after such a woeful performance in Athens, the odds are firmly stacked against the reigning Barclays Premier League champions making the quarter-finals.

“That’s the worst we have played in Europe,” the United manager said.

“It was a really poor performance. We never really got going from the start and we didn’t deserve anything because of the way we played.

“We never really got to grips with things and to a man you could hardly pick anybody out. We just didn’t perform.

“We came into the game in good form and a good mindset but it just didn’t show. I am just surprised. I didn’t see that level of performance coming. I just didn’t see it.”