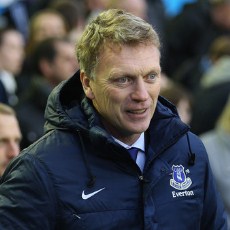 Everton boss David Moyes has admitted that he is wary of outstaying his welcome.

Moyes has been watching the way Arsenal fans have turned on Arsene Wenger this season.

Wenger said: “Supporters might decide they want a change from managers who have been there a long time but I think that’s wrong because you are not going to get any stability at the club and will probably waste a lot of money chopping and changing all the time.

“Arsene has done a great job getting them in the Champions League every year. Of course their supporters want trophies but you look at their stadium and it is unbelievable. Only one or two clubs in the country would not be envious of that stadium.

“He has put down something that is going to be there for a long, long time. Arsene is part of that. He has seen the club through the transition from Highbury to The Emirates and continually got a team that has made the Champions League.

“Ok, they’ve not won the league or cups but they have always been up there. Arsene can go as long as he wants. Arsene Wenger will be the one who decides what he does at Arsenal. I don’t think it will be the board or supporters.”

Jens Lehmann : Arsenal Will Benefit From The Signing Of Per Mertesacker