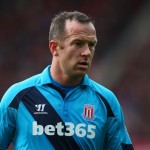 Spanish news site fichajes.net suggests that the Stoke City midfielder has emerged on the radar of former Everton and Manchester United boss Moyes who took over at Sociedad late last month.

Former Rangers and Blackpool ace Adam has been with the Potters since joining from Liverpool in the summer of 2012 and has made 11 appearances in the Premier League this season with just five of those being starts.