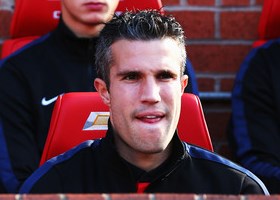 It has been revealed that David Moyes played down Robin van Persie’s flat performance for defeat to West Bromwich Albion.

The Manchester United boss is hopeful that van Persie will be restored to the starting line-up for the trip to Shakhtar Donetsk.

“I hope so. He has not missed an awful lot – his injury was a small injury but hopefully he will be back. Our plan was to get him some time today but maybe not as long as we put him on for. Fifteen-twenty minutes was the plan if we could.”