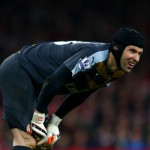 Reports are out claiming that Arsenal legend David Seaman says they can beat Tottenham without Petr Cech.

A groin injury suffered against Swansea has ruled Cech out of Saturday’s fixture, which could define Arsenal’s season.

But even as the last goalkeeper before Cech to consistently give Arsenal such stability, Seaman, 52, said: “He will be a loss because he’s a quality goalkeeper. But (the way) I look at it, if the back four play well it doesn’t matter who’s in goal.

“I’m so fed up of all this negative stuff about Arsenal. All right, it’s a negative about Petr Cech but David Ospina will come in again, has shown what he can do.

“People thought it was a little bit harsh when he got made the number two. He’s not the quality of Petr Cech but let’s just see how it goes.