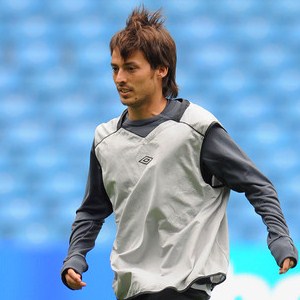 Manchester City midfielder David Silva has declared that he is confident of living up to his reputation at the Eastlands club.

The Spain international signed for Manchester City from Valencia in the summer for a big-money fee.

However 24-year-old Silva has not yet impressed at Eastlands, with his playing time restricted due to the competition at the club.

Silva, though, believes his gradual adaptation to life in England will assist his chances of regular action under boss Roberto Mancini.

Silva said on the club’s official website that : “I think that physically, I’m feeling better day by day,”.

“Of course, I need to get a few more minutes on the pitch to get to optimum fitness levels and I’m sure that will happen with so many games coming up.

“I’ve been away a couple of times with the national team and that hasn’t helped. I’ve settled well in Manchester, but again, the international break probably came at a bad time for me. I love the club and fans already and I’m starting to learn English so I can communicate better with my team-mates, so as time goes on, things will get easier for me.

“I’ve been treated really well by everyone and the other players have been great, but I need to push on now.

“The Premier League is exactly the way I thought it would be with a high-tempo to the games. It’s very competitive and a challenge, but one I’m enjoying and ultimately hope to thrive in.”