David Silva has declared that Manchester City owe manager Manuel Pellegrini for lifting them to the brink of the Premier League title. 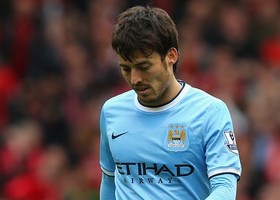 The Spanish international has had a major role to play in the title push, the Spanish World Cup winner reckons it is Pellegrini who is the real wizard behind the team’s success.

Silva said: “I’m aware of being called ‘Merlin’. Shaun Wright-Phillips gave the name to me after one particular game. I know all about who he was and I like it.

“But it’s Manuel whose made it a happy place, he’s brought a joy and happiness around the place.

“Also to our style of play. You see that in the way we play, we are attack minded and score lots of goals.

“He’s made us competitive in every competition. We’ve gone further in them. He’s given us that extra push and taken us one step further maybe.

“His calmness has been obvious. He’s added that to the whole club and it really helps us at difficult moments. It’s nice to have that calm attitude around you when things get tough.

“That has suited us. So has the style of play he’s brought with him. He likes us to have possession, create chances and score lots of goals.”