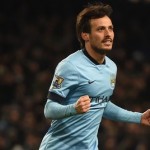 Reports are out claiming that Manchester City midfielder David Silva has urged fans not to lose their Champions League hope.

City go to Barcelona next month needing to overcome a 2-1 first-leg deficit.

Silva said: “If we play like we did in the second half, we can go through, but we have to get better.

“In the first half, we weren’t good – they were much better. They were much more cohesive than us on the pitch, picking up all the loose balls. Until the goal we were in it but once they scored we were bad.

“Second half, though, we got better. We had chances to equalise but once the red card came, we couldn’t do more.”