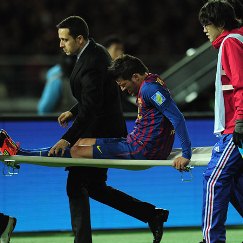 Barcelona sauntered into the final of the Club World Cup to face South American champions Santos but their 4-0 victory over Al-Sadd in Yokohama was overshadowed by a broken leg suffered by forward David Villa.

Villa was stretchered off after 37 minutes of the contest between the champions of Europe and Asia after taking a shot and landing awkwardly, with initial estimates suggesting he will be sidelined for as much as six months with a fractured tibia, possibly missing Euro 2012 as a result.